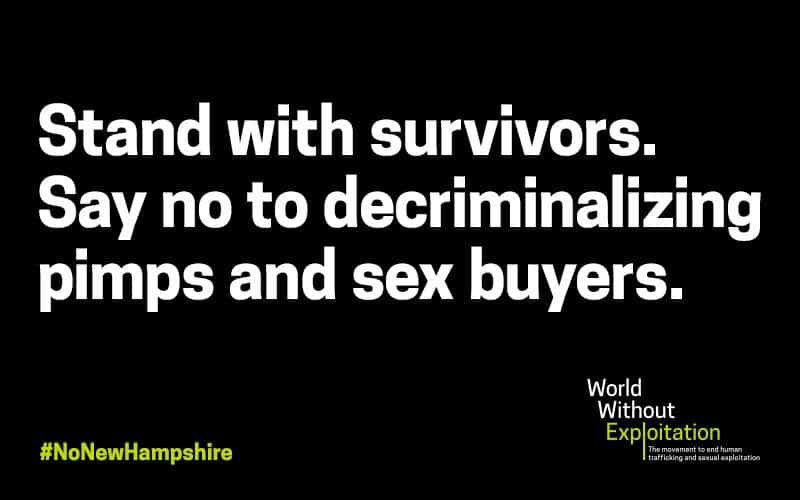 The fact of the matter is that we should look at our state’s response to prostitution without any thought of decriminalizing the selling of human beings on an open market. And those calling for decriminalization are often the ones making money from the exploitation of others.

Representative Elizabeth Edwards was quoted in the Union Leader this week. “I am worried about those women because it is our laws that make it unsafe,” Edwards said. “They can’t call police if they’re raped or robbed and they don’t have the same access to justice as the rest of us.”

The law prohibiting prostitution does not make it unsafe. It is unsafe because it is prostitution. Commercial sex acts themselves are unsafe, from disease, damage and all sorts of deprivations and trauma. We know this because we lived it.

A young male survivor said, “Men buy girls for sex. They buy boys to abuse them.” Our experience was wrought with violence. It wasn’t because it was against the law. It was because the buyers are often cruel.

Ms. Edwards says that those prostituted individuals don’t have the same access to justice as the rest of us. Decriminalizing prostitution will not help them.

Decriminalizing prostitution will fuel sex trafficking and increase demand for sex tourism in NH. That’s what happened in Rhode Island. It hurt the state’s economy, their businesses, and their people.

Decriminalizing means no law to protect anyone. Police cannot intervene in suspected exploitation or force, because there is no probable cause. The activity isn’t against the law, so an officer has no reason to approach. As for a person calling police, please remember, we call police after assault. Police cannot protect individuals in advance. They can only respond.

Sexual exploitation happens on a continuum. From pornography and stripping to escort services and brothels, women and children are being sold for the use of sex buyers. Is that what we want for NH?

Picture your four year-old. Do you want them to live a life of being raped for profit – when they grow up?

The role of the government is to protect the people. Standards of behavior are crucial to preserving a safe place to live. We have laws against hurting people in other ways. Prohibiting prostitution is a protection we should keep in place.

We are in full agreement with the Governor on this issue.

Abolitionists, like us, call for increased penalties and hefty fines for sex buyers and traffickers. Use those fines to fund services for victims so they can start the difficult work of recovery. It’s bad enough that the people arrested for prostitution are considered criminals when more often than not, they are victims. We believe that lifting the prostitution charges can empower them to move on with their lives and become Survivors. All of this would make NH safer.

Rather than becoming an inviting place for purveyors of human flesh, our state would be a place of elevating people from the brutality of sexual exploitation.

It is not compassionate to be subjugated to a life as an object for someone else’s sexual pleasure. Compassion is taking the time to listen to her story and see that the choice was made for her long before she got trapped in the cycle of abuse that exploitation inevitably brings. Prostitution research says that 80-90 percent of women in the commercial sex trade were sexually abused as children. So think about how the dial has already been turned. What was so freely taken from them, is now going to be paid for, and this seems like an upgrade. This gives the illusion of choice, a better life. But real compassion understands that no little girl dreams of becoming a prostitute.

← "A Day Out of the life - Looking Back & Moving Forward, Together" White House Appoints Survivors of Human Trafficking →